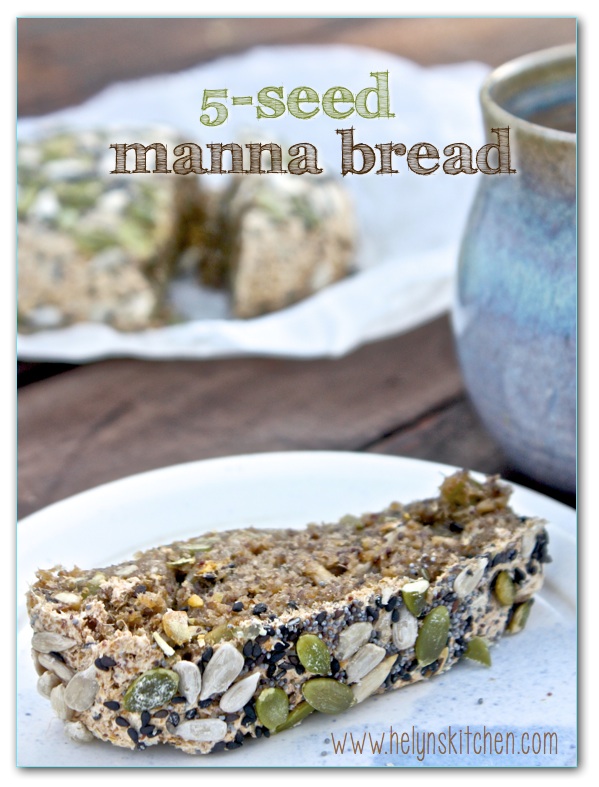 Have you ever purchased “manna bread” at the health food store? It’s pricey. But it’s damn good. Nothing at all like a regular loaf of bread, manna (also known as Essene) bread is dense, chewy and naturally sweet. Three times was NOT the charm for me making this loaf. No. It was more like five. Five times. I researched various recipes online. It just wasn’t happening. I almost gave up! I persisted and I’m so glad I did.

I first tried making this bread in my dehydrator (three times) to keep it raw. What I wound up with was fermented loaves. Ugh. I’m sure there is a technique to this that I am missing because a lot of people online have made this successfully. I’m not a raw foodist after all, so I thought I would try it in the oven. The second time in the oven was a winner. I don’t want to scare you away from making this bread, because if you follow my instructions (and you don’t mind baking it), you’ll be delighted with the outcome. It’s NOT hard. Well, not anymore… wink. In fact, it’s incredible easy to make once you get the hang of it.

I kept the oven temp at about 225° F so the bread still has a lot of “life” in it, if you will. It’s just not raw. What is so special about manna bread? The most important thing is that the grains are sprouted. I am usually somewhat intolerant of wheat. But I can eat this bread with no ill effects. I’m sure it’s because of the sprouting. It changes the composition of the grain. Firstly, it decreases the amount of gluten. And the grain is easier for the body to digest as the sprouted grains are converted into a plant, and are no longer a starch. So if you are slightly gluten-intolerant, you may be able to enjoy sprouted wheat. But fret not if you are unsure. You can use any grain to make a hearty Essene bread; rye, amaranth, buckwheat, quinoa, or a combination of grains. You can also use spelt or kamut, which are heirloom wheats and still contain gluten, but supposedly in a more digestible form.

Essene bread is also sometimes called “bible bread” because of its heritage. Essene derives its name from the ancient Judaic sect known as the Essenes who flourished from the 2nd century BC to the 1st century AD. In the Essene Gospel of Peace, a 1st century Aramaic manuscript, the Master gives the following instructions on how to make the bread: 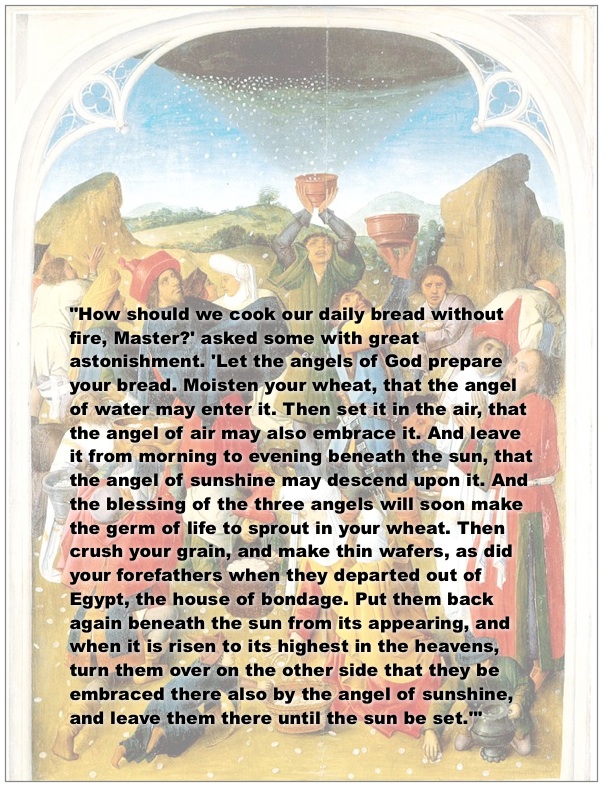 So, the first thing you want to do, of course, it to locate a good, ORGANIC grain to use for sprouting. If it’s not organic, it may not sprout as well. Who knows why. Maybe because there are GMOs involved. Most health food stores carry wheat berries and other whole grains in their bulk bins. I used white winter wheat for this loaf.

Soak your grains overnight in pure water. In the morning, rinse well and place them in a large sprouting container. I used a quart sized mason jar. Cover the jar with cheesecloth or whatever you have handy that will breathe. I used a doubled paper towel. Secure with a rubber band. Place the jar in a dark place so the grains can sprout. Rinse well twice per day. Mine only took 2 days to look like this… 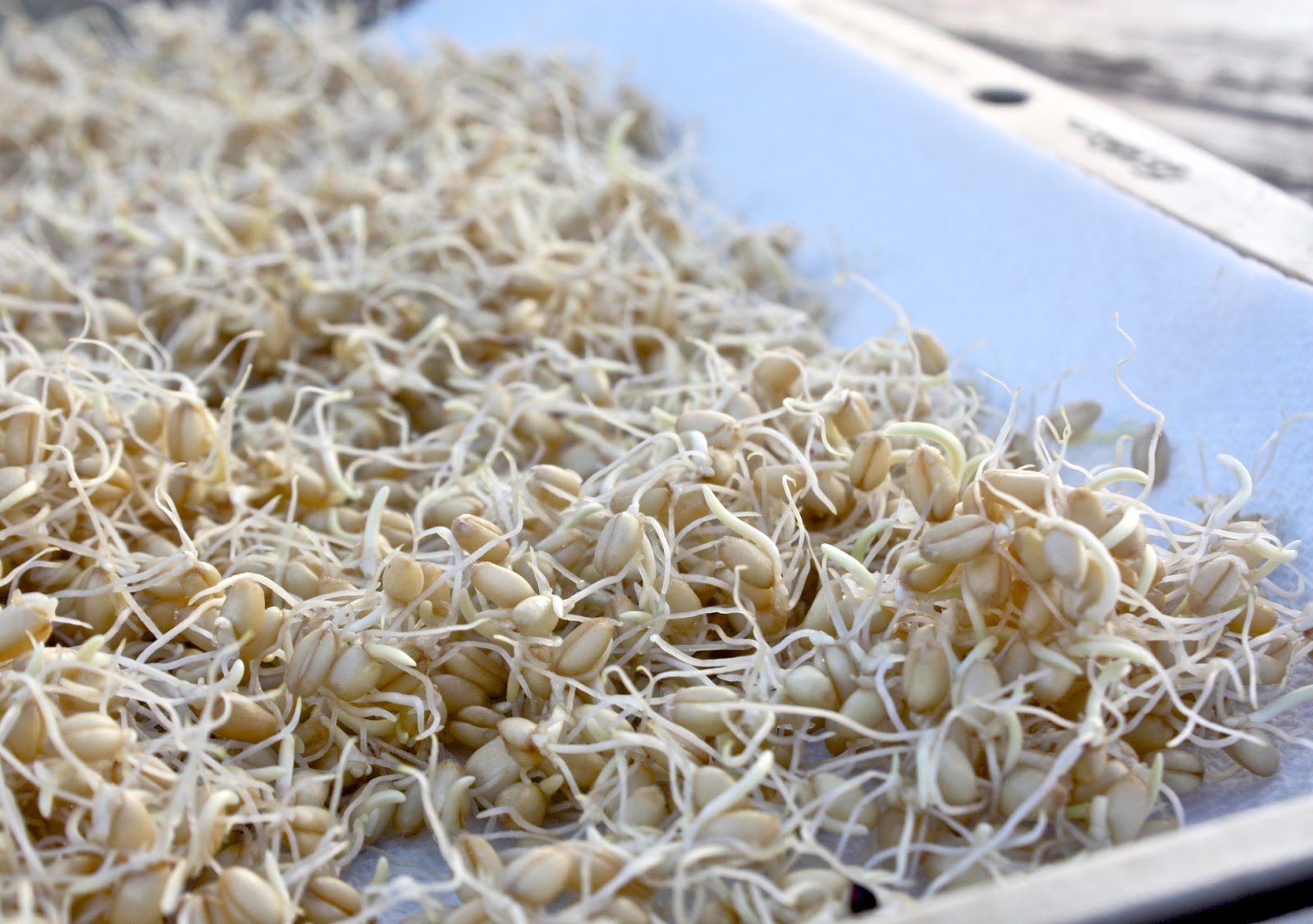 There are many different opinions out there on how long the little sprouts’ tails should be before they are “ready.” Some people say the same length of the grain, some people say twice as long… they key thing is you want to taste the sprouts and they should be slightly sweet. Then you know they’re done.

Now here is a really important step—one that I missed and which is the reason I had so much trouble in the beginning… After the final rinse, you want to dry the sprouts as much as you can. NOT in a dehydrator, just enough to get the water off of the surfaces. I laid mine out on a baking tray on top of some paper towels for a while. I even put them outside in the sun for a bit. When the sprouts are just damp to the touch, place them in a food processor and process until you get a nice, gooey paste. Here’s the weird thing for me. Many recipes that I found online said to “knead” the bread. Forget it! That dough was way too sticky and wet to knead. Unless you put flour in it maybe, which violates everything about this bread’s simplicity and purity.

So, simply scrape the dough out with a wooden spoon or a spatula and place it on a lightly oiled parchment paper. Using wet (or oiled) hands, shape the dough into a loaf. It should be fairly short, maybe 2″ high at the most or it will take too long to bake.

The other great thing about this bread is its versatility! I added seeds to mine (see ingredient list below). But you can add whatever pleases your taste buds. I have also made a loaf with raisins and cinnamon that was really yum. OR, just leave it as is. It has a wonderfully nutty, sweet taste on its own. Have fun with this. It’s fall here in the northern hemisphere. It’s a perfect time to be experimenting with bread baking!